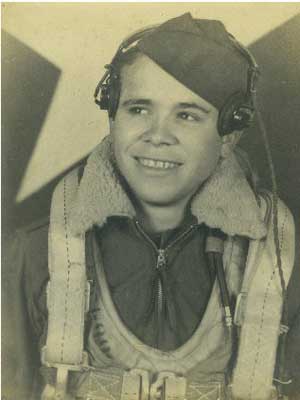 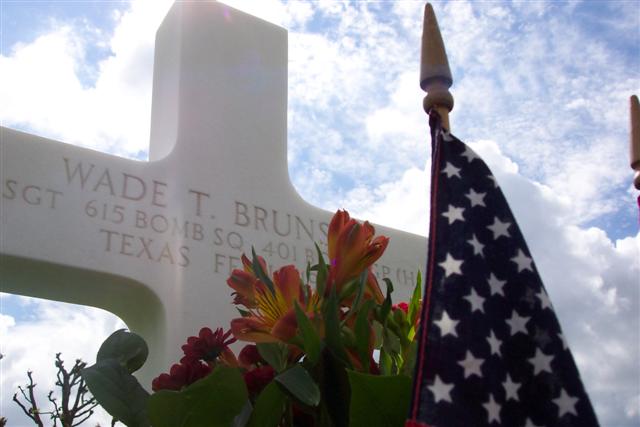 This is the grave of Wade, I didn't adopted his grave because it was already adopted.
But Wade flew together with Joseph V. Del Torto , and both died in the crash.
Thats why we always visit his grave and place some flowers with it.
He just belongs to us. 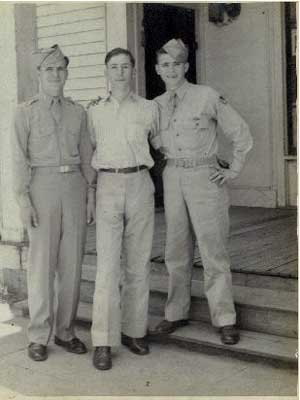 Wade Travis Brunson was born in Texas on Feb. 17, 1925, named after one of the heroes
of the Texas War for Independence.

His father was a carpenter.
The family at that time was 6 girls and 3 boys.
Wade was the next-to-youngest child.
He was a child during the Great Depression, and so the family never had a lot of material things.


On the picture you see from left to right : Bill , Don and Wade Brunson 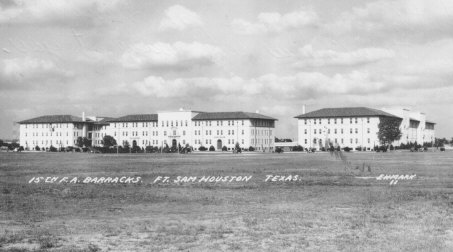 Wade was entlisted on July 30 , 1943.
He was stationed at Fort Sam Houston

Wade arrived at Deenethorpe in November 1944 and he took over the place of the original ball turret gunner, wo was wounded at both legs, during another mission
On Feb. 16 , 1945 he flew with the B-17 " Maid to Order " , mission 209 , to gelsenkirchen.

Their plane was hit by German " flac " and crashed in the Netherlands.

So Wade had the job of ball turret gunner. 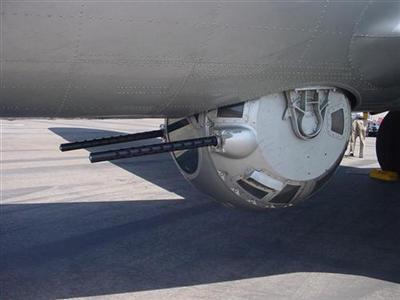 Most Flying Fortress crew members considered the ball turret the worst crew position on the aircraft.

You should be immune to claustrophobia because there wasn't much room to move around.
He was curled up in the ball in a fetal position and without a parachute close by.

The turret revolved a full 360° , covering the aircraft against attackers from below. 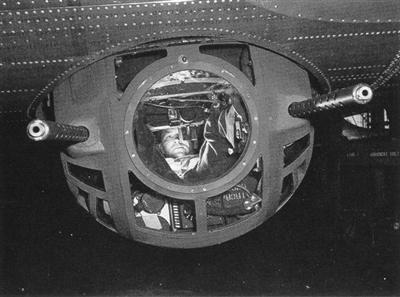 Ironically , the " ball " turned out to be one of the safest-as far as suffering battle wounds.
His back was against a armor plated door, and he had less of his body exposed to enemy fire than the other crew members.

During the take off the " ball " was empty , when airborne , Wade could enter the "ball ". 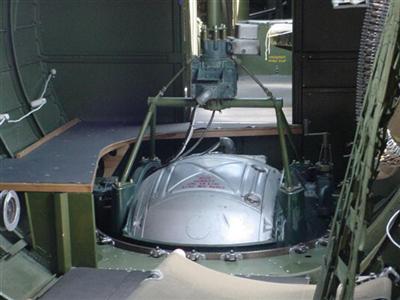 According to a crew member , Wade had the habit of falling asleep during the flight.

It's assumed that this will be the reason he didn't hear the " bail out " signal from Hansen.

It was the responsibility of the Radio man and Waist gunner to unlock his door , but the Radio man ( Del Torto ) had problems with his air phones, so he didn't hear the " bail out ".

In the tail of the plane civilians found the body's of Brunson and Del Torto with their parachutes partly open.

So it is a fact that they tried to leave the plane, looking at the particle open parachutes of both men.

Wade was buried together with Del Torto on Feb, 20 in Hardenberg
and were reburied on Nov. 9, 1945 at Margraten.

Wade died just one day before his 20th birthday. 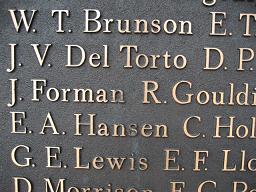 You can read everything about the mission and the fatal end by clicking the next links.

Here`s a picture of Wade during his training, front row , second from left 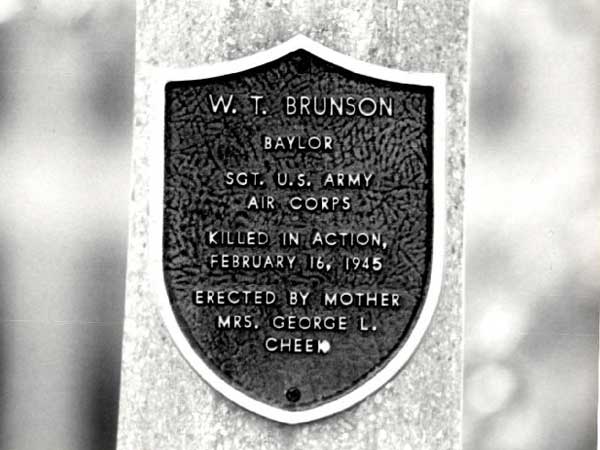 This plaque and 130 others , can be found on the lampposts of Baylor University campus
Waco Texas, in front of the Sid Richardson Science Building one dedicated to each of Baylor's war dead.
( Jasek, Frank J. )

These are two pages from the HEART OF TEXAS , they asked me to write a story.

It`s about the search for family and the persons who helped me. 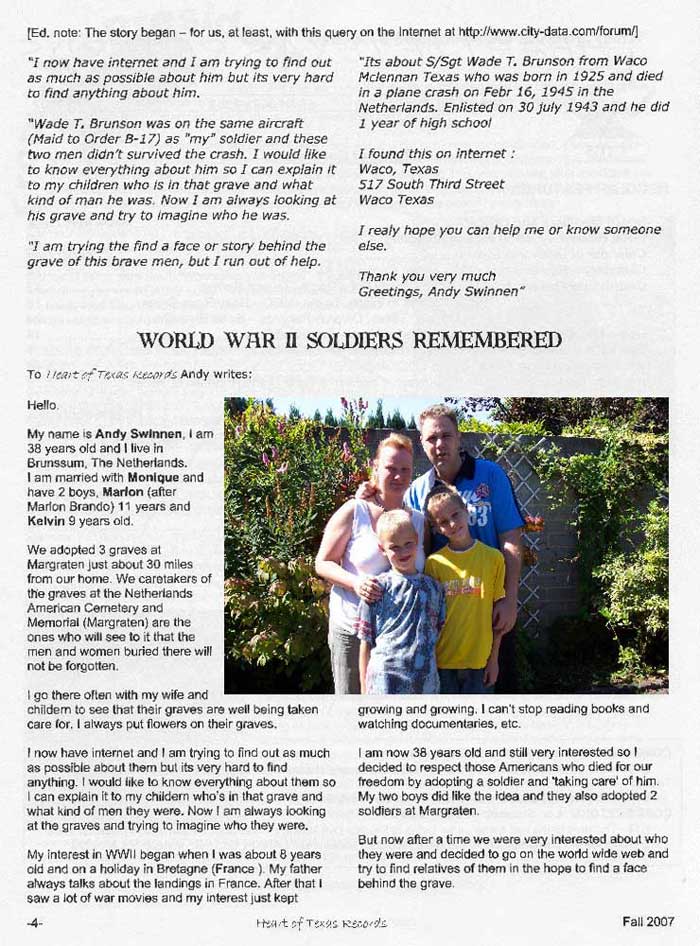 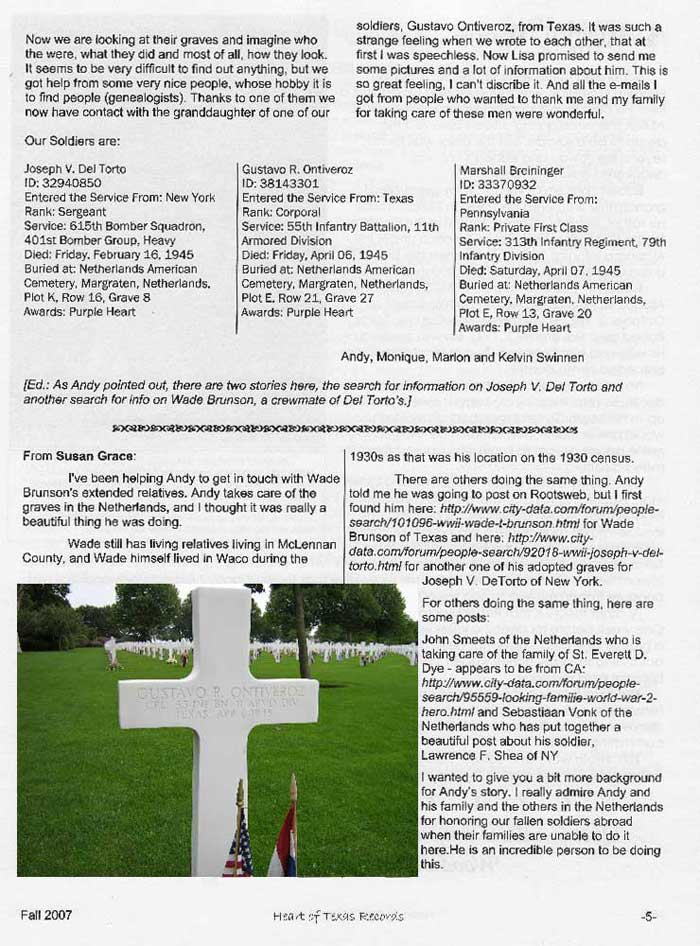 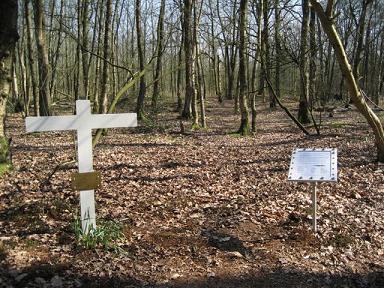 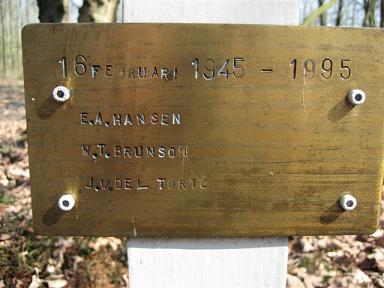